I WILL COME OUT AGAIN

The two sculptors in the show I Will Come out Again, Bruno Walpoth and Alex Rane, share the idea that through their art they present their energies, histories, spirituality and ultimately themselves. Both artists are channeling themselves into their works: whether it is a solitary moment or an expansive life of experiences and emotions, it is they who are there, inside these sculptures. But it is we the viewers who allow the artist to emerge only when we interact with their works, when we recognize ourselves in them, our own emotions and stories…we allow these two artists to “come out again.”

I Will Come out Again presents two contemporary figurative sculptors working in a reductive manner. Walpoth’s sculptures, primarily in wood, are static and remote yet their charisma makes us want to know them, to know what they are thinking. It is their stillness that attracts us. Rane’s sculptures in marble pose expressively; their curving bodies and tilted heads openly express ranges of emotions.

The artists share the desire for their art to be more than simply the final sculpture itself. Rane states, “The goal is not perfection, rather it is an attempt to derive meaning from the world.” Walpoth echoes this sentiment and says “I do not want to portray a precise individual, but to represent a more general being.”

A further commonality is their inherent belief of putting of themselves into the works. As Walpoth has said, and it is a sentiment shared by Rane, “I have the impression that the more time I dedicate to a sculpture, the more energy gets inside it.” It is precisely this energy of the artists coupled with the interaction of the viewer that allows them to “come out again.” 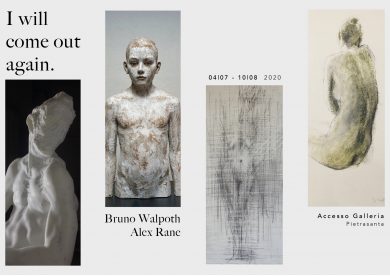